Metaphorical Writing On Balance for 6/7/2013

Balance has been an issue for me my whole life having had weak ankles and flat feet, since I was a child, plus my right left coordination badly leaves something to be desired.  Yet, though I quite often decide otherwise, I do know how to be a witness to the tape recordings in my mind and quiet it–a different kind of balance.  Of course, this does not mean that I never spit in the wind and choose to forget I know this.

In fact, in 1983 I did the firewalk.  There had always been a sliver of a doubt about what allows one to walk across the burning coals was actually no more then a thin layer of sweat across the bottom of ones feet.  What lay testament to my doubt only being an aberration of the mind was the fact that at the exact moment I allowed a thought in my mind for a split second, I received a small burn between my toes and had to switch back to center or I would have been roasted–literally.

The ego is a stunning inventor of thoughts of vanity.  An acquaintance of mine who always thought he had enough act for himself and others, though I never thought it was together–as in having ones act together–went for it a second time and was so badly burned that he was on crutches for a month.

Today, playing with a new camera I repeated the same shot over and over with flash without flash, with different settings, altering the view,  the angle and how close I was while playing with two things.  One was a miniature red smiling Buddha. The other a rock I had gotten at a seminar which at the time, I wrote the word ‘wholeness’ on, but it had smudged off later,.  Still, I kept it on my desk, since it always seemed to be smiling.

Now the bottom of that rock is not smooth at all, and the Buddha is flat at the bottom, but has a big round belly, which leans it forward when one tries to place it on the rock for a foundation, so, if it is not placed exactly right, the curve of the rock rocks and rolls and the Buddha falls forward.  Therefore, you can imagine my surprise when the first time I placed it just right.  The second time I could still do it quickly, but the third time I was trying so hard I could not do it at all.

This was when I remembered the firewalk, so I decided I was going to have a firewalk moment.  Instead of focusing on where the point of the rock and the Buddha could meet and stay in balance, I focused only on my inner balance.  Sure enough, the moment I focused on my own inner balance, I could once again place the Buddha on the rock easily.  In fact, so solidly that I could take my camera on and off the desk and move things, but Buddha and rock remained stable.

I now have a new ritual,  Every day I will take a minute to place the Buddha on the rock, and remember this lesson about balance.  Below is one of the pictures I took.  With things being as unstable in the world as they are today, I think remembering about balance is a good thing.  Don’t you? 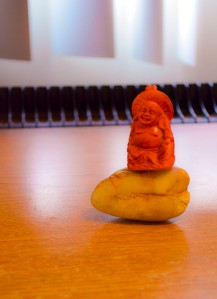